Two teams from Reading SC took part in the National Schools Sailing Association Single Handed Team Racing Event this weekend just gone, held at the Aztec Upton Warren SC in Bromsgrove near Redditch.  Team A “the veterans” consisted of Hadey, Joe and William,  Team B “the newbies” consisted of Edward, Rhys and Thomas.  Photos below. Karen was the team coach, who was also looking after two teams from Claire’s Court just for good measure.  This was a large competition with 35 teams taking part from all over the country an increase from last year, and involving age ranges up to 18 years old.  So quite a daunting challenge for Edward, Rhys and Thomas and their first time out solo as it were as far as team racing was concerned.
Both days where fairly sunny, the Sunday better than the Saturday, with light winds on both days.  The lake was fairly small and somewhat “sunken” with high banks on two sides and trees on the other, which led to tricky and fluky wind patterns.  Competition was stiff from the get go with Reading A only managing to win two races on Saturday, one of them against Reading B, and the other a bye due to the odd number of teams. However, this belied the fact that the racing was close with them losing out by single point on a number of occasions. Reading B found it tougher going as you would expect without the advantage of a bye on the first day didn’t manage chalk up a win despite some achingly close results.
Day 2, saw some changes in fortunes. Firstly, Team A started to get their eye in and racked up a number of wins to finish the competition in 22nd place with a respectable 4 wins out of 8. However on the downside Team B had been in the wars. At the end of Saturday Edward had an altercation with a deckchair (don’t ask !) and spent a couple of hours in A&E and was now sporting two heavily bandaged little fingers – but was still determined to carry on sailing. Thomas unfortunately managed to pick up a tummy bug and so regretfully had to retire leaving Team B down to 2 men.  It is still possible to win a team racing event with only 2 boats, if they finish 1st and 2nd or 3rd. However,unfortunately other teams know this and tend to gang up on one of the boats to ensure they get pushed to the back.  So Edward and Rhys had a number of frustrating races – not much fun for an 11 / 12 year old to be chased around a lake by 16 – 18 year olds ! Any way, their last race was against a mixed team from Goring and Dorchester so a local Derby so to speak. Reading bowed but undaunted, down to two men, one with bandaged hands started well.  Goring/Dorchester made a mistake in dividing their attentions on both Edward and Rhys which allowed Edward to sneak through on the downwind leg from 4th up into 1st place.  Rhys managed to leave two of the other boats behind, but still had to contend with with their other boat now in 2nd place on the last beat, who a couple a yards from the finish line slowed down to try and hold up Rhys from coming in 3rd. But Rhys had the finish line in his sights and with a jink one way and a jink the other slipped in behind the Goring / Dorchester boat to snatch 2nd place and an overall win !  I am sure you could hear the roar from the parents as far as Birmingham.  The smiles from the victors was a treat to see when they came off the water and thoroughly well deserved after all their hard work.
Any way all should be proud of their performance. Team B ,Edward, Thomas and Rhys in particular learnt a lot about team racing as well as sailing in light winds (plus the perils of deckchairs!) and displayed great perseverance in continuing to plug on through against teams that were both older and had far more experience of team racing.
Thanks to Karen for managing both the two Reading teams and the two Claire’s Court teams (who by the way finished 19th and 26th).  Paul R was one of the umpires for the event as well.
Thanks should also go to the NSSA and Aztec Upton Warren SC for staging such a large event. 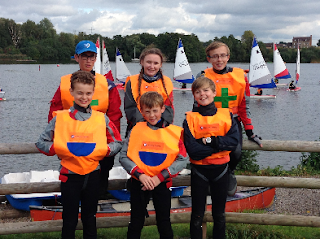 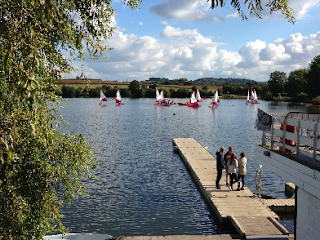