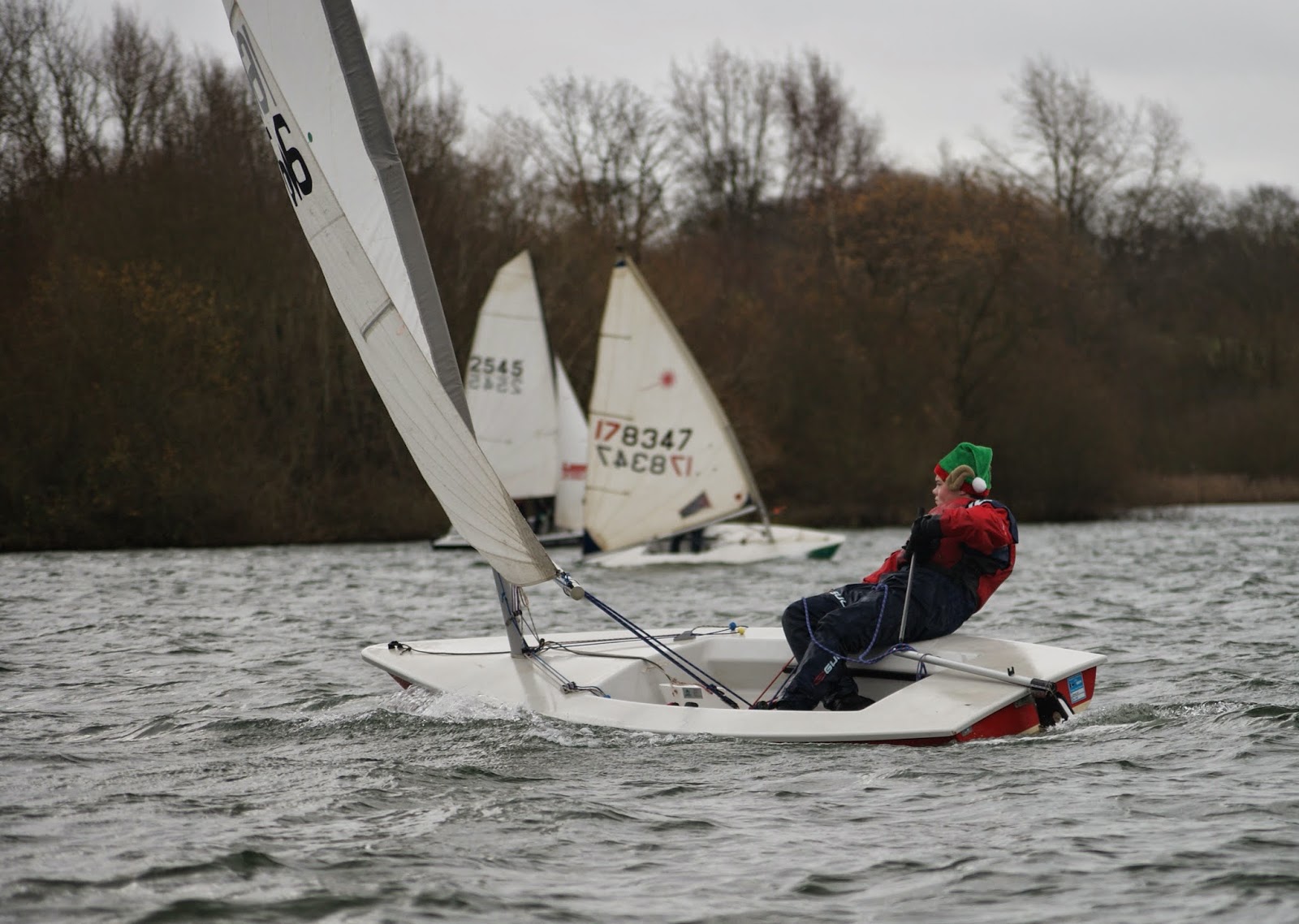 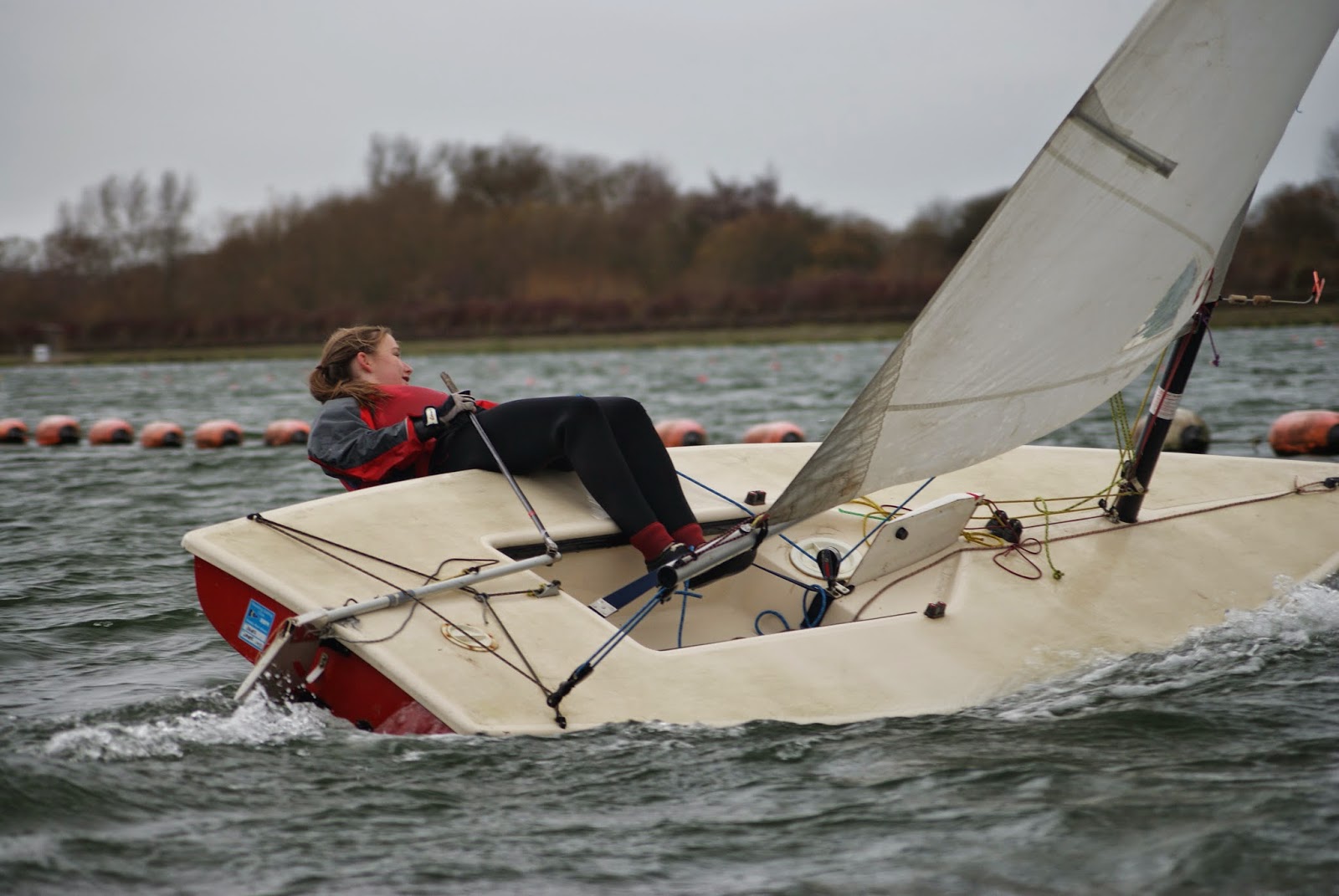 It was a strong wind this morning, about 15 -16 mph from the SW and quite gusty. Jon M set a long beat down to 3 then back along the buoy line to 4 down to 2, across to 5 down to 8 then 6, 7 and back through the start.
There were 16 starters which was good considering the brisk wind and David C (Laser) was first back through the start line followed pater JC in another Laser then Newton & Roz in the Laser 2000 with Ian C (Supernova) close on their heels.  Paul R (Aero) came through next in 5th place followed by Steve & Lynn in the 505 (nice to see you back on the water Lynn). The next group was the mid-fleet Laser pack who enjoyed a terrific scrap all through the race, led initially by Simon B followed by Mike A, Dave L, Dave P and Curtis. There was a slight gap back to Hadey who was going well with her 4.7 rig (some of the others were wishing they had the same rig!). Hadey was closely chased by Rod B (Laser) then further back was the sole Solo of Mike C just ahead of Hugh (Byte) with Paul D (Radial), who was persevering well in the challenging conditions.
At the end of the second lap the Laser Cs were keeping it in the family and still leading, but Ian had nipped in front of Newton & Roz with Paul R and Steve & Lynn still running 5th and 6th. The leader of the Laser pack was now Dave L and Dave P had slipped to the rear by virtue of just touching Dave L’s boom at No 5 and having to do penalty turns, at the same time taking Mike A down the lake with him! Further back Rod B had got past Hadey and Hugh was practising capsize drills.
By the end of the third lap Paul R had gained three places to move up to 2nd behind David C with Jon C 3rd and Ian 4th trying to shake off Newton & Roz with Steve & Lynn not far behind them. Dave L and Mike A were leading the midfield Lasers and Dave P had gained two places to move up to 9th. Curtis came to grief on this lap inverting his Laser and impaling the mast in the mud, so it was an early bath for him (literally). Rod B also capsized gybing round No 6 allowing Hadey and Hugh to slip past him.
Having led from start to finish David C came through the line to take victory with Paul R a little behind in 2nd , but Ian had moved up to take 3rd with Newton & Roz 4th and Jon C 5th.
Dave L took the honours in the midfield battle, but Simon B retired presumably capsized (but not sure of this). Hugh also retired after a quadruple capsize! Mike A also capsized by pulling the boat over on to himself (difficult to do in these windy conditions), the end of his boom got embedded in the mud and by the time he got going again he had been passed by the whole of the fleet. Rod had made up two places and crossed the line in 9th. In sight of the finish Mike C capsized gybing round No 8 allowing Mike A to get past him on the water.
The final positions on the water were 1st David C, 2nd Paul R, 3rd Ian C, but on handicap Ian will probably be pipped by Newton & Roz. Hadey sailed well and by not capsizing will probably take 6th place on handicap. Paul D did well to keep going and get a finish.
It was considered that we should have a capsize league as well as a normal leader board but as with all sailing procedures there are numerous complications. It looked as if Hugh would take the capsize honours with 6, then Ian C and Jon C with 4, Mike C with 2½ (what’s half a capsize !), Paul D 2, then Simon B, Rod B, Curtis and Mike A with 1 each., but then along came Paul R with “too numerous to count”.  It then turned out that Hugh had 3 separate capsizes but the last of these was a quadruple capsize. Now does this count more or less than four separate capsizes and does a capsize to windward count more than a “dry” capsize to leeward? Also does a capsize resulting in a retirement count more than one which just results in a time loss.  Ian was using his capsizes as part of his normal technique for gybing around 4, so should he be penalised for improper capsizes ?, Sally suffered a virtual capsize – she thought she might capsize if she went out so kindly volunteered to prepare soup and rolls. This probably counts less than an actual capsize but definitely deserves bonus points.
Hadey, Dave P, Steve & Lynn and David C did not capsize at all and probably should be disqualified for this. David C said that he would have capsized, but could not see the capsize flag so considered that he was not entitled to do so.
We may have to rewrite the rules to sort this issue out.
Have a Happy Christmas and best wishes for 2015.