The first day of Power Boat Level 2 was a little chilly and drizzly, but our 6 intrepid trainees, Gary, Louise, Ian, Henry, Mike and Craig, together with their instructors, Ken, Richard and Brian took to the water. Tracey sat in the club house reading a book….the commodore and his other half popped in briefly….but otherwise it was a quiet day on shore. While on the water and in the training room the 6 trainees were being put through their paces – nervous at the beginning of the day, but showing great promise by the end.

Day 2, much warmer, saw a lot going on….the modeller yachters got Mike and Ian, good practice for them, to bring in all their little buoys ashore for a good ‘scrub up’ and repaint, in readiness for their Open Meeting next Sat, 5th.

While on the water there was towing, coming ashore, standing off a mark and lots more to be learnt and sessions in the clubhouse, learning knots, weather conditions etc.

Meanwhile, lots of sailors took to the water for a ‘blast’…..Ian in his Laser, Steve trying out a new mast, Frantz, single handed in his Merlin Rocket, flying his blue and white kite, Gary and his…..one design…?, Carole in her Comet, Colm and Robert in their new Firefly, Maurice in his Comet, Tracey in her Topper – having ‘played’ with ropes and things on her Leader all morning, no quiet day with a book again for her! – Dean and Lucy out in their Laser 2 for a bit of R ‘n R for Lucy after a hard week at college? – Steve in his Laser and Mark trying out his new (quite old really) Laser as well.

Monica was seen repairing a shovel and spraying things with fluorescent paint ……..has she really lost the plot now….!!??

All the while the model yachters were driving the rubber duck round and round trying to break up the heavy clumps of weed around the shore – model yachts stop dead in any weed!!

Lunch was picnics on the deck, bacon butties for Sue and her lot and left over fajitas for Gary, Carole and Rene, with entertainment from Lucy getting into Dean’s foot less dry suit and trying not to look like Mr Blobby!! What a laugh!

All the boats on the water were a challenge for the trainees, practicing their newly learnt skills. But they were ..’all very good’….according to their instructors and all passed with flying colours and left clutching their certificates and books, ready to do lots more power boat driving – well done guys! 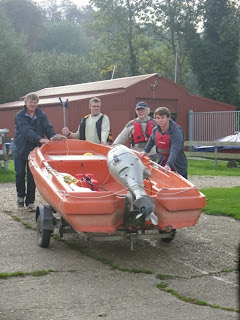 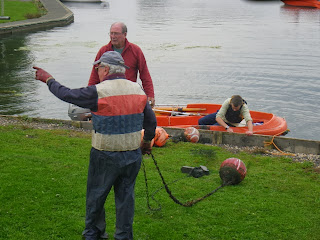 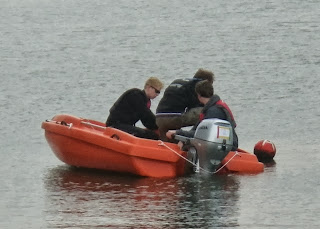 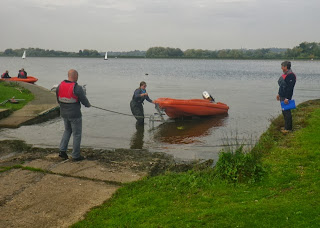 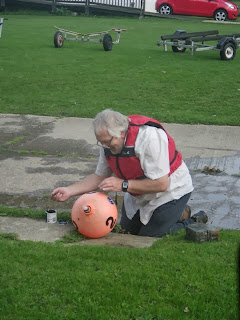 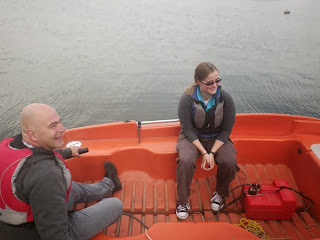 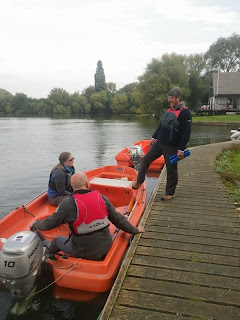 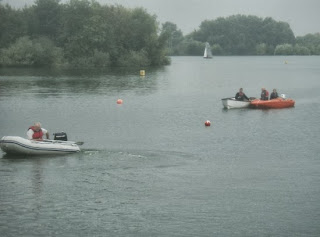 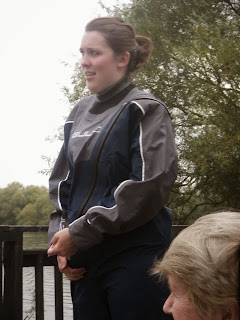 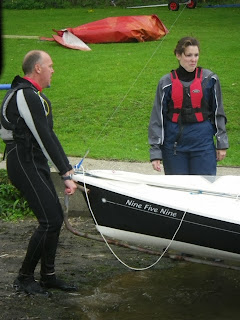