August 14, 2013 jollysailor
A different format for the August Pink Day – BBQ time – so no breakfast and after a comprehensive introduction to the racing rules by Ken, off we all went, all 24 of us from an Oppie, to a Feva – it was great to see so many new faces out on the lake.

It was really good to see so many pirates making the " progression " up to Pink Fleet and giving us " oldies " a run for our money. With a bit of encouragement and coaching from Ken and Brian out on the water they sailed really well with David taking lots of pictures to prove it!

The hour long race took in the whole of the lake except for buoys 7 and 1, a great course in a nice 6 – 10 miles an hour wind.
Although strenuously denied by Ken, it's rumoured that he was seen by Brian and Richard cuddling the new 15hp engine……..!!!! Nice one Ken.

Monica decided to race with Dean in his " new " Laser 2 but they didn't even make the start line and had to be rescued when the mast became horizontal, needless to say they were both disqualified for making a mess of the lake.

Commodore Jerry with crew Elaine hit the outer distance mark not once but twice and were immediately disqualified – like the Royal family perhaps only one of them should be on the water at any one time to be sure of succession!

Pink Fleet is all about fun and learning and the quality of the sailing/racing is now up to a very high standard – look out Laser Louts on a Sunday morning, the Pinkies and Pirates will soon be competing with you!

We saw the first spinnaker being flown by John, James and little Amber in their Lark. Never in the annuls of Pink Fleet have so many seen so few having such a great time in a boat.  Flying a spinnaker with the boat half under water with Amber furiously baling out and all of them laughing with not a care in the world was a delight to see. The Pink Fleet cup was duly awarded to the three of them. But where was the cup? Gary won it last month but he was late to the  party – on his way back from Cowes, don't you know!! Ken's wife Barbara came up with a great alternative with 3 plastic Pink cups which were presented to the three of them to the delight of the Pinkies on the deck.

There was another spinnaker flying too, by Anna in a Feva, with her Dad – well done Anna.
Meanwhile in the clubhouse the 2 Barbara's were hard at work preparing a gourmet lunch, with Pink Fleet chef, Paul,  stoking up a massive BBQ outside. Everyone tucked in and by the time the Pirates took to the water, under the watchful eye of Carole and Gary, the table was bare!!
Pirates.
The few that were there thoroughly enjoyed sailing around the island and capsizing of course. There were kayaks and surf boards, with Kate and Son deciding to paddle to the island as well, they managed a few feet and fell off – they just didn't seem to be able to paddle in unison!! Tane had another go in his Oppie from the beach while Affe went out in a kayak with  Kate.
People stayed on just enjoying the day and watching the youngsters messing about in the water – another lovely family day at RSC. 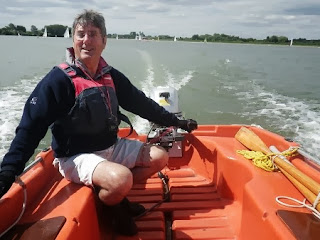