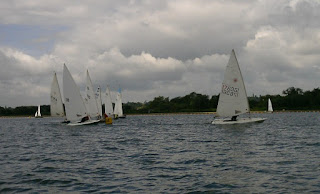 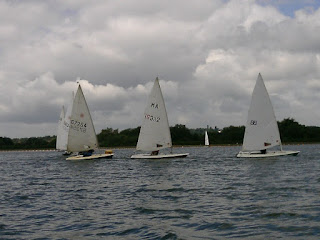 The sailors were greeted with for the first time in months warm weather with actual sunshine! Mark S.O.O.D. decided to set a course which looked more like a ball of knitting. I think all the buoys were used.

19 boats were on the water with the wind picking up all the time ,the S.O.O.D. had to delay the start to the race because all the boats and everyone please get to the start line on time,because in future the races will start on time! Anyway 10.35 the race started . The first mark was X , a short leg into wind from the start line. Everyone was trying to get clear air from the wind shadows caused by their fellow competitors sail! Chris was involved in a minor collision with Jon . Doing a 720 penalty turn resulted in a poor start from him. David sailed into clear air and pulled away from the fleet.

Mike and Sally are in a very small minority group of sailors! its very rare for a husband and wife to be in the same boat together. Steve and Lynne also fall into this category but Lynne was on race duty. Steve had his reserve crew, unfortunately they need to brush up on their technique, the end result was an early bath!

David continued to stay ahead of the fleet but Chris clawed his way back to reach 2nd place and Ian was 3rd.