The Gillette Wednesday evening results have now been reported with the adults and juniors separated as they were last year. The combined results can still be found here http://www.readingsc.org.uk/results/GilletteB17.htm

Well done to Jemima who was nearly 4 minutes ahead in last weeks combined results.

August 11, 2017 jollysailor
With A WSW wind of about 10 mph Paul R set the first beat to 4, then 9s, 3p, Xp, 5s, 6s, 7s and back though the start.
Pursuit Race
There were 14 starters and Chris A (Solo) was first back through the line followed by Karen (Laser) then early starter Ron (Mirror). At the gun Karen was in 1st place with Chris A in 2nd and Ellen & Newton up to 3rd.
The top six were – 1st Karen (Laser); 2nd Chris A )Solo); 3rd Ellen & Newton (RS200); 4th Hugh (Laser); 5th Steve S (Solo); 6th Adrian (Rooster)
Handicap Race
Adele and Sally decided not to sail the second race so the fleet was down to 12 boats and in the light wind the race was a two lapper.
First back through the line were Newton & Ellen (RS200), just 8 seconds ahead of Steve & Lyn (505 – nice to see the Galleon back on the water, as long as you are not in its wind shadow!) and in 3rd position was Karen(Laser) followed by Adrian (Rooster), Hugh (Laser), Steve S (Solo) and Gareth (Laser).  30 seconds later Nev crossed the line in his Comet with Chris A (Solo) close behind him), then there was a gap back to Jeremy (Laser) and Mike C & Sally (Wanderer – so she did do the second race but not in her Comet!) and bringing up te rear was Ron in his Mirror.
At the end of the second lap there was no change in the order of the first three boats, but Hugh, Steve and Gareth had all moved up one place and the only other cahge was Chris getting past Nev.
The final positions on the water were –
1st Newton & Ellen; 2nd Steve & Lynn P; 3rd Karen;  4th Hugh; 5th Steve S; 6th Gareth.
On handicap there should be quite a few changes with Newton & Ellen still in 1st place, but Nev should move up to 2nd place with Karen in 3rd, Steve S 4th, Chris A 5th and Hugh 6th.
Thanks to Paul R and the OOD Team of Jerry C, Gary W, Julian W and John W. 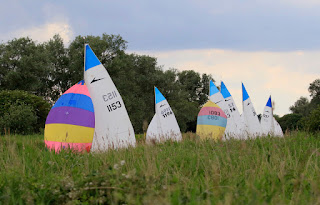 Sent from my iPhone

August 6, 2017 jollysailor
With a strong SSW wind of 13-15 mph and persistent drizzle, so not a particularly pleasant evening,  Chris A set the first beat to X, then 1s, 4s, 9p, 6s, 7s and back through the start.
Not surprisingly there were only 8 starters tonight and first back through the line was Newton in his Solo, just ahead of the four Lasers of Ellen, Hugh, Richard H and Rick. Although Sally & Stuart (Leader and the only double hander out tonight) did cross the line level with Rick and they were followed 20 seconds later by Alistair (Laser) and Paul H (Supernova).
By the end of the second lap Ellen and Hugh had both got past Newton and further back Alistair and Paul had got past Sally & Stuart.
On the third lap the first four boats maintained their positions, but Paul had passed Alistair and crossed the line level with Rick in 5th place. Sally & Stuart had also passed Alistair to regain a place.
No change in the first four boats on the final fourth lap, but Rick had just eased away from Paul and Alistair had regained the place he lost on the previous lap.
The final positions on the water were –
1st Ellen; 2nd Hugh; 3rd Newton; 4th Richard H; 5th Rick; 6th Paul H; 7th Alistair; 8th Sally & Stuart
On handicap Newton will take 1st place and Sally & Stuart will move up to 6th.
Thanks to Chris A and the OOD Team of Ian S, Karen and Dean.

August 5, 2017 jollysailor
We hosted a Leader Open meeting on the weekend of 29th/30th July and the fleet was not huge, but it was friendly! There were 9 boats competing, six from RSC and three visitors, with three races on Saturday and three on Sunday.
On Saturday the wind was fairly light, about 10 mph from WSW and dropped off slightly during the day. The first race was a three lap affair and first back through the line on the first lap were Dave & Ann, but they were being chased down by the hot favourites Chris & Jane, who crossed the line in 1st place at the end of the three laps. Dave & Ann managed to hang on to 2nd place with Karen & Milo (both new to Leaders and using Tracey T’s boat) coming in 3rd place.  Veteran Leader sailors Nev & Mike just beat Newton & Bob for 4th place with Sally & Stuart just behind them in 6th. Dave & Adele (a RSC Junior and big thanks to her for stepping up to crew) were 7th. Dean M from Ostend (sailing solo) and Hugh & Dean were having their own battle at the back of the fleet.
After the first race there was some frantic tuning going on with Newton & Bo changing their sail and Hugh & Dean raking their mast!
Newton & Bob’s sail change obviously had an effect as they won the second race with Chris & Jane coming 2nd after a race long battle. Dave & Ann had another good race taking 3rd place and Dave & Adele went one better in this race finishing in 6th place.
There was more frantic tuning by Hugh and Dean before the start of the third race and unfortunately Sally injured her back and could not take part in this race. Adele had to leave, so Dave was left solo for this last race of the day. There was a right melee at No 6 towards the end of the first lap and several boats had to re-round the mark which caused a drastic change in the order.  In the end Dave (without Adele) took the victory with Newton & Bob in 2nd place and Karen & Milo 3rd.
On Sunday the wind was stronger, about 13 mph from the SW, and Dave was glad to have his mate Paul (from Milton Keynes)  crewing for him. Dean also managed to find a crew, in this case Will S from RCS (who usually sails an Enterprise).
The stronger wind seemed to suit Chris and Jane and they won all three races. The 2nd place was keenly contested with Newton & Bob taking two 2nd places and Karen & Milo taking the other. Dave & Paul were going well with 4th place in the first two races and were 4th at the end of the first lap of the third race, but this position was eventually taken by Nev & Mike. Dean & Will had mixed fortune finishing the first race in 7th place, but capsizing in the second. Will decided that was enough for him and he was replaced with Franz (another RSC sailor !)
It was interesting to note that the Leaders sailed with the club racers in the morning races and would have taken the first three places in the handicap race!
Overall Positions
Well done to all the competitors, particularly the overall winners Chris & Jane, but also including the most consistent team of the day Hugh & Dean (who also did the most tuning between races)
An enjoyable  weekend with six races, lots of food and a great Barbecue on Saturday night.
Thanks to everyone who helped with the event, especially Sally who did all the organising and Geesje and Sue for sorting out the food.

August 3, 2017 jollysailor
There was a reasonable SW wind about 12 mph, which increased throughout the morning.
Today was a race within a race as eleven club racers were joined by nine Leaders competing in an open meeting which had started with three races on Saturday and continued with another three races today. This report covers the club racers and the Leaders will be covered separately.
Pursuit Race
At the finish gun the positions were –
1st Jon (Laser); 2nd Peter S (Byte); 3rd Adrian (Rooster); 4th Sylvia(Radial) 5th Mark (Laser); 6th Richard S (Laser)
Handicap Race
Jamie sat the second race out, so the club fleet was down to 10 and first back through the line on the first of three laps was Jon (Laser) just ahead of Mark (Laser) who was 30 seconds ahead of Richard S (Laser) in 3rd place and it was interesting to note that the first Leader actually crossed the line not far behind Mark. Adrian (Rooster) and Rick (Laser) came through close together in 4th and 5th places with Jess B (Radial) 30 seconds behind them in 6th. Sylvia (Radial) and Peter |S (Byte) came through close together (as you might expect) followed by Alistair (Laser) and finally Dave P (Mirror).
There was little change in position on the second lap or the final lap apart from Sylvia gaining two places to move up to 5th.
The final positions on the water were –
1st Jon; 2nd Mark; 3rd Richard S; 4th Adrian; 5th Sylvia; 6th Rick
On handicap Jon should keep 1st place, but Sylvia should move up to 2nd with Mark and Richard down to 3rd and 4th places and Jess and Peter S up to 5th and 6th.
However if the Leaders had been included in the handicap race positions they would have finished in 1st, 2nd and 3rd places!
Thanks to SOOD Chris A and the OOD Team of Mike C, Bill C, Katrina R, Chris S and Tony R’s replacement (sorry your name was not recorded on the race sheet)

August 2, 2017 jollysailor
Tonight there was quite a frisky westerly, about 13 – 15 mph, with stronger gusts coming through.
Karen, Ellen, Sylvia, Paula, Mike T and Cecilia all decided to go for Radial rigs, which was probably the right move in the conditions.
Ellen got a good start and led from start to finish with Karen never far behind. Mark who was lying 3rd capsized on his way to the first mark on the second lap. After recovering he had passed Karen and was almost up with Ellen when he capsized again. His mast came out of the boat and he retired.
Newton in his Solo had a close battle with Sylvia just managing to stay ahead of her throughout the race.
Jamie (Laser) was going well moving up from 8th on the first lap to finish 5th on the water and he had a good battle with Dave & Ann (Leader) and Peter S (Byte) who finished just behind him in 6th and 7th places.
Not far behind these there was another good battle between Paul H (Supernova), Sally & Stuart (Leader) and Dean & Nick (Vago) and they eventually finished in 8th, 9th and 10th places respectively with Paula (Radial) a little way behind them in 11th place.
Hugh & Hadey (Leader), Mike T (Laser), Angela & Crew (Comet Duo) and Chris & Carol (Sport 14) all finished one lap early.
Cecilia (Radial) unfortunately missed a mark and retired after the first lap.
The final positions on the water were –
1st Ellen; 2nd Karen; 3rd Newton; 4th Sylvia; 5th Jamie; 6th Dave & Ann
On handicap Newton should take the victory and Sylvia, who was sailing on the Radial handicap figure,  will move up to 2nd place past Ellen and Karen, who although using Radial rigs were sailing on the full Laser handicap. Peter S should move up to 5th with Dave & Ann retaining 6th place.
Thanks to SOOD Steve S and the OOD Team of Monica, Mark and Patrick