July 13, 2016 jollysailor
It was very breezy this morning blowing about 16 mph SW. Richard S was OOD, but he did not record the course for posterity, so no idea where the fleet went, but wherever it was they went there quickly!
Pursuit Race
There were 15 starters and it was definitely a Laser day with 8 out there plus 2 Radials.
William in his Topper hung onto the lead on the first lap with Chris H (Comet) in 2nd place, then came Jon in the first of the Lasers with Hadey (Radial) 4th being rapidly caught by Karen coming through in 5th place. Ellen & Newton in the RS200 had caught Luke in the family Radial and he was about to be caught by Paul R in his Aero. Then came a stream of Lasers, James, Mark, John W, Gareth, Rick and Dave P (good to see you back on the water or should that be in the water!). Laser 61642 brought up the rear of the fleet (let us know who you are by signing in !).
At the gun Jon had got past Wiliam and Chris to take the victory.
The final positions were – 1st Jon; 2nd Karen; 3rd Ellen & Newton ; 4th Paul; 5th Hadey; 6th Luke
Handicap Race
The wind got up a little more for the second race and the fleet was down to 12 boats.
Paul came through the line in the lead with Newton & Ellen 2nd, Karen 3rd ,Jon 4th and Mark 5th these five held those positons for all three laps of the race. On the first lap James was 6th just ahead of Luke and Hadey who crossed the line virtually together. Then there was quite a gap back to 61642 in 9th place and another gap back to Gareth in 10th place and then William and Rick bringing up the rear.
At the end of the second lap the first six were in the same order, but Hadey had moved up one place to 7th and Gareth and Rick had gained one place to 9th and 11th.
At the finish the first five had retained their positions, but James must have had a moment earlier in the lap as Hadey pipped him across the line to take 6th. 61642 did not make it to the finish so this moved Rick up one more place.
Final positions on the water were –
1st Paul; 2nd Newton & Ellen; 3rd Karen; 4th Jon; 5th Mark; 6th Hadey.
On handicap Hadey should move up to 5th with Luke moving up to 6th.
Thanks to Richard S and the OOD Team of Isobel, Bill C and Richard.
Leave a comment

July 7, 2016 jollysailor
There was a light SW wind, about 6 mph, and Peter R set the first beat to 4, then 9p, 5s, 6s, 7s, and back through the start.
There were 14 starters and unfortunately the wind dropped just before the start gun, which made it a struggle to cross the line. Eventually everyone got under way and Karen (Laser) was first back through the start with a clear lead from Steve S (Solo) with Hugh (Laser) 3rd, Newton (Solo) 4th, Peter S (Byte II) 5th and Ellen & Luke (RS200) 6th.  Curtis (Laser) came through next in 7th place just ahead of Mike A (Lightning), who was followed by Paul H (Supernova), Sally & Stuart (Leader) and Mark B (Enterprise). Then bringing up the rear were the three Lasers of Rick, Richard H and Mike T.
Steve S retired at the end of the first lap, but not sure of the reason.
At the end of the second and final lap Karen was still clear ahead but Ellen & Luke had gained four places to move up to 2nd place with Newton moving up to 3rd. Hugh was now 4th and Mark B had moved up five places to 6th. Another five place mover was Richard H who was up to 8th, but everyone else either maintained position or lost places.
The final positions on the water were –
1st Karen; 2nd Ellen & Luke; 3rd Newton; 4th Hugh; 5th Peter S; 6th Mark B.
On handicap there should be quite a few changes with Newton taking 1st from Karen with Ellen & Luke down to 3rd, Peter S up to 4th , Mike A up to 5th and Hugh 6th.   .
Thanks to Peter R and the OOD Team of Carol & Chris M, Monica and Paul R.
Leave a comment

July 4, 2016 jollysailor
Saturday saw the culmination of months of planning,  the 2016 Thames Valley Challenge, a youth and junior team racing event in RS Fevas.  This is an annual event that is rotated between the local sailing clubs, and this year it was the turn of Reading Sailing Club to host the event ably supported by Goring SC.
10 teams took part, consisting of 60 plus competitors. That, along with almost 40 helpers in terms of race crew, rescue boats, umpires, ferry boat drivers, shore crew, galley crew etc.. plus spectators, meant that well over a 120 people were on site, making this one of the biggest if not the biggest event held at the club.
Reading SC entered two teams, with Reading 1 consisting of 3 boats with  William, Joe and Ben as helms and Thomas, Alex and Sam as crew.  Reading 2 had Milo, Louis and Rhys as helms and Kate, Dylan and Rory as crew.
For those unfamiliar with the concept of team racing, the idea is that each team races each other in a series of short ~10 minute races. Individual scores don’t matter, it is the team result that counts. Tactics, using the racing rules to gain an advantage to hold up a competitor’s boat to let one of your team boats through, play a big role.  Races occur back to back, with 3 minute start sequences. The go for the first race is the 3 minute signal for the next and so on. Boat crews are changed over on the water once they have completed their particular set of races. So the whole event runs like (or is meant to) a sausage machine – which takes a lot of pre-planning and co-ordination from all the various event teams.  So this is a lot for the children to take on board (as well as some of the adults!) particularly those new to team racing.
Conditions were sunny, but with a challenging force 4 gusting 5 from the west.  After the various briefings for the event teams and the competitors the Fevas went out with their smaller mains, reefed from the get go with the first race kicking off just before 10.00 am.
At about half way through the day, with each team having sailed about 5 races, Reading 1 led the pack having won 4.  Reading 2 had yet to win a race, but given the stiff wind conditions and the relative inexperience, and the light weight crews, they were going very well to keep going and to keep the boats upright. Milo helming in Reading 2, deserves a special mention for coming first and second in a number of his races – a great result for his first go at team racing.
The day finished on race 40, just 5 short of the full schedule of 45, each team having raced 8 races.  This itself is a record as far as Thames Valley Challenge is concerned with most years not getting much beyond 30 races- so a triumph for the start boat !  The final results revealed some very close racing with two teams tying for 1st place with 6 wins out of 8, and 4 teams for 3rd place each with 5 wins, including Reading 1.  This took some careful reading of tie breaking rules before the Principle Race Officer came to the final adjudication below (ably advised by Paul R).
Congratulations go to Dorchester for pipping Goring Girls at the post on the tie-break and taking first place.  As you might expect there was a bit of a grudge match going on between Goring Girls and Goring Boys. I think the girls were very pleased that they came ahead of the boys.  Reading 1 unfortunately lost out in the 3rd place tie-break and ended in 6th place based on average points scored. But as you can see it was close racing. Reading 2 didn’t manage to win a race, but as before given that this was their first time out in team racing and the challenging conditions, they all did very well and show much perseverance to keep going – augers well for future events.
Selected photos for the event below. Thanks again to all the teams that turned up and a special thanks to all the helpers from Reading SC, Goring SC and the other clubs that made the event the success it was. 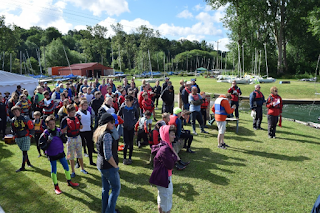 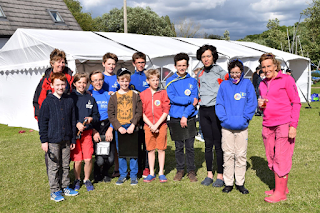 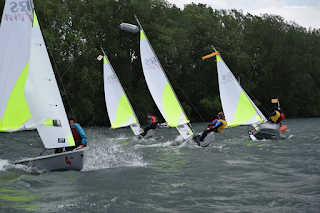 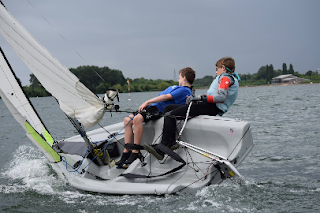 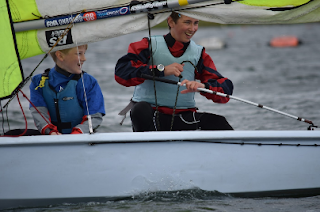 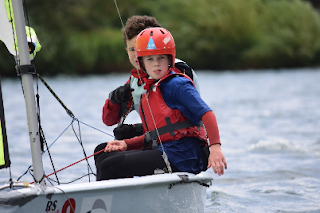 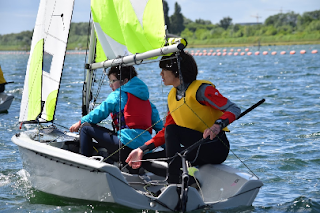 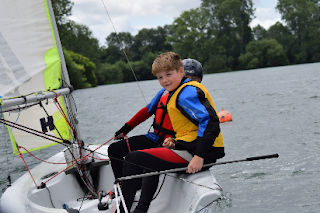 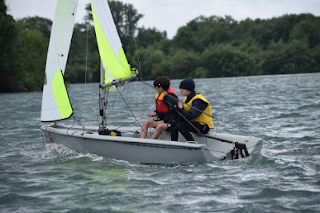 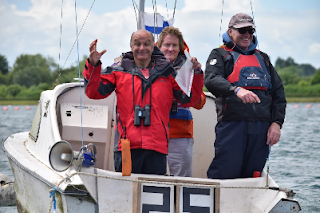 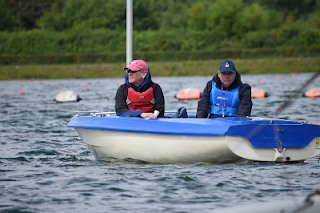 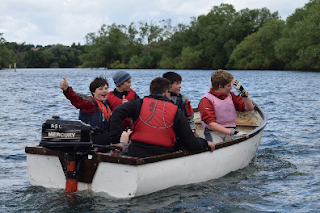 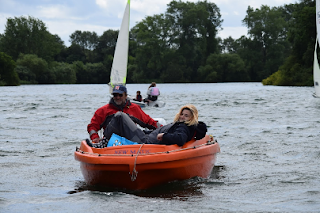 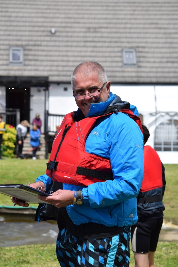 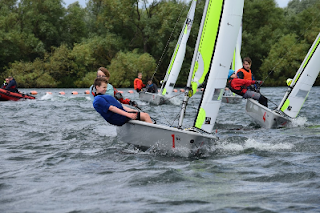 July 3, 2016 jollysailor
There was a 6mph SW wind, although it varied up and down during the race and Peter S set a first beat to 4, then 2p, 5s,6s, Xs and back through the start.
There were 19 starters, which was actually the same number as last year.
Newton & Ellen (RS200) were first back through the start followed by Ryan & Roland (National 12) and Karen (Laser). Peter R (Enterprise) came through in 4th place with Hugh (Laser) 5th, Mike A (Lightning) 6th,Adrian (Laser) 7th, Hadey (Radial) 8th,Steve P (Laser) 9th and Dave I (Radial) 10th.
Sally (Comet) and Eddie B (Laser) retired at the end of the lap.
At the end of the second lap the first four boats were in the same positions, but Adrian had moved up two places to 5thand Hadey was up two places to 6th. Behind these there was a close battle between Gareth (Laser), Rick (Laser), Dave I, Chris H (Comet) and Franz (Contender) with Bob (Solo) bringing up the rear. Dave I decided two laps were enough and retired after crossing the line.
On the third lap there was no change at the front but Hugh had regained 5th place pushing Adrian down to 6th. Steve P was up to 7th but in a battle royal with Hadey, Rick, Mike A, Gareth and Alistair S.
The fourth lap saw no change in the positions of the first four boats, but Adrian was back up to 5th with Hugh 6th and Mike A up to 7th. Alistair had gained two places to 11th and Chris H two places to 12th, but the boats from 7th to 13th were constantly changing position throughout the race.
At the end of the fifth and last lap Newton & Ellen had a commanding lead and crossed the line well ahead of Karen, who had just managed to get past Roland & Ryan. Peter R had kept his 4th place throughout the whole of the race and Adrian had got away from Hugh to finish in a safe 5th. Hugh nearly got caught at 6, but just managed to stay ahead to finish 6th with Hadey, Steve P and Mike A finishing line astern just behind Hugh. Chris H gained another two places to move to 10th and Gareth gained two places to 13th and Bob managed to catch and pass Franz.
The final positions on the water were –
1st Newton & Ellen; 2nd Karen; 3rd Roland & Ryan; 4th Peter R; 5th Adrian; 6th Hugh.
On handicap the first three will remain the same, but Chris H, Mike A and Hadey should move up to 4th, 5th and 6th respectively.
Thanks to Peter S and the OOD Team of Sylvia, Damian, John and Brian.
Leave a comment
« 1 2