June 30, 2015 jollysailor
With a 10 mph SW wind Mark set a beat down to 4, across to 2 then on to 3 and a run down to 8 then the typical 6, 7, start sequence.
There were 21 starters in the Pursuit Race and it was good to see the Mirrors of Pat and Gordon out and Richard B making an appearance in his Laser.
As usual William (Topper) was first back through start line followed by Gordon P (Mirror) then Ian C (Supernova), Karen (Laser), Peter S (Byte) and Steve P (Laser).
By the finish gun Ian had taken the lead with Karen 2nd and Jon (Laser) had moved up to 3rd.  Ellen & Newton (RS200) had moved up to 4th from 8th, Sylvia (Laser) was up to 5th from 9th and Steve P had kept 6th place.
Mike & Sally (Leader) and Pat and Gordon (Mirrors) decided one race was enough excitement for one day, so there were 18 starters for the Handicap Race.
At the end of the first lap Newton & Ellen RS200) were 1st, Ian C (Supernova) 2nd, and then the Lasers of Karen, Jon, Sylvia and Rod. Peter S (Byte) came through in 7th place followed by Curtis and Mike A in Lasers followed by Adrian (Vago). Then there were four more Lasers manned by Richard B, John W, Steve P and Alistair S. Next was Mike C (Solo) in a close battle with David M (Laser) and finally Hadey (4.7) and William (Topper).
On the second lap the first six boats had maintained their positions, but Mike A and Adrian had both moved up two places to 7th and 8th respectively. Steve P had moved up one place and David M was up two places.
At the gun, Ian finished just ahead of Newton & Ellen with Karen a little way back in 3rd. Sylvia and Rod had both gained a place to move to 4th and 5th. There was a close battle between Jon and Mike A
for 6th place, Mike actually got in front of Jon round 6 and 7 only to lose out on the short dash to the line as Jon tacked slightly earlier. Curtis gained a place, John W and Mike C gained two places and Alistair S gained a place, so quite a lot of movement in this final lap.
The final positions on the water were 1st Ian C; 2nd Newton & Ellen; 3rd Karen. On handicap it is going to be very difficult to split 1st and 2nd but Karen should keep 3rd with Peter S just snatching 4th from Sylvia. (That’s a bad move Peter !)
Thanks to Mark B and the OOD Team of James H, Paul W and Bob H
Leave a comment

June 26, 2015 jollysailor
It was a pleasant evening for sailing with a 10 mph SW wind and the sun peeping through light cloud. Mike A set a longish beat to 4, then basically zig-zagged back up the lake via 2, 5, 8, 6 and 7 and back through the start.
There were 16 starters and first back across the line was David C (Laser) just in front of Ian C (Supernova) and Karen, Sylvia and Curtis all in Lasers. Next through was Mike T in another Laser closely followed by Chris A (Solo) and Paul H (Supernova). Then there was a slight gap to Peter S (Byte) in 9th place who was pursued by the Lasers of Dean and Alistair J (good to see Alistair join us for his first Gillette outing this season). Mike C (Solo) was close to these two and being hotly pursued  by Bob in another Solo.  The Leaders of Sally & Stuart and Hugh & Hadey were next through, although Hugh & Hadey were having to play catch-up, as when the start gun sounded Hugh was tied to the jetty and Hadey was sprinting across the grass having got caught in traffic. Hadey took a flying leap into the boat as Hugh set off for the start line – a real old Le Mans start ! Bringing up the rear was David M (Laser), but this was highly creditable as David had only completed his RYA Level 1 a few weeks ago !
By the end of the second lap Ian had taken the lead and in fact kept it right to the finish. Karen was now 2nd and David 3rd, but these two had a terrific scrap changing places all through the race.  Sylvia was 4th and Curtis 5th and they maintained these positions to the finish. Chris A had got past Mike T and Mike C had moved up two places.
The third lap saw the 11 leading   boats maintain their positions, the only change through the fleet was Sally & Stuart moving up one place to 12th by passing Alistair.
After four laps David had passed Karen to take 2nd, Mike T had retaken Chris A to move up to 6th and Alistair had repassed Sally & Stuart.
At the finish gun, Ian crossed the line in 1st place well ahead of Karen who had retaken David to take 2nd. Chris A had repassed Mike T and Paul H and Peter S crossed the line together impossible to split on time.
The final positions on the water were 1st Ian – Supernova; 2nd Karen – Laser; 3rd David – Laser and these will not change on handicap.
Good to see David M and Rick out on the race course again so soon after their initial training.
Thanks to Mike A, Tracey & Amy T and Martin W for doing their OOD duties.
Leave a comment

June 23, 2015 jollysailor
The forecast was for a 12 mph SW wind, but it was actually a bit friskier than that for the 17 starters on Sunday.  James P set the first beat to 5, down to 9, back up to 4 on the buoy line then a brisk reach to 2 then up to 3, a long run to 7 and back through the start,
In the Pursuit Race as usual William in his Topper was first back through the start line followed by Newton & Ellen in the RS200 and then Dave P (Laser). Paul R (Aero) was 4th followed by the five Lasers of Jon, Karen, Steve S, Richard S and Mike A. Next through the line was Mike C (Solo) pursued by three more Lasers helmed by Curtis, John W and Steve P. Then Roland & Ryan in a National 12 came through followed by Adrian (Vago) and Alistair S (Laser).
At the finish gun Newton & Ellen had taken the lead with Paul 2nd and Jon 3rd.  Most other boats had maintained position but Steve S had moved up three places to 4th. Mike A thought he had heard a premature finish gun and started messing about and promptly capsized, so actually finished the race on his side! Mike C was not too pleased as Mike A had told him that the gun had gone, otherwise Mike C reckoned he would have caught most of the boats ahead of him ! (Is that true?)
Dean J in his Vago started the race but disappeared somewhere on the first lap.
Final positions were 1st Newton & Ellen RS200; 2nd Paul R Aero; 3rd Jon Laser.
The Pursuit Series leader is still Richard S but he is now being pressed by Jon.
In the Handicap Race the leaders at the end of the first lap were Newton & Ellen with Paul R 2nd and Jon 3rd.  There was a close midfield scrap between the Lasers of Richard S, Steve S, Curtis and Steve P. Dave P retired on this lap, but not sure why.
The second lap saw the same two boats lead through the line and the biggest mover was Karen up from 10th to 6th. There were three retirements on this lap, Alistair S, Dean J and Roland & Ryan.
At the end of the last lap Paul R had taken the lead with Newton & Ellen 2nd and Jon 3rd (looks a familiar podium !)
Roland on being asked what his boat was, replied a b***dy handful. There are quite a few of these regularly sail at RSC !
The Handicap Series leaders are Newton & Ellen and they are going well in the RS200 so could take some catching.
Thanks to James P and the OOD team of Phil M, David M and Tony R.
Leave a comment 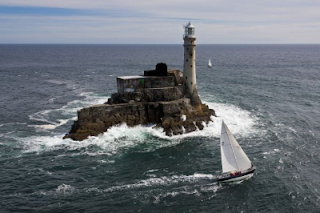 This Sunday just gone saw the second race of the BBQ series –  “The Fastnet”.  A group of a dozen or more intrepid sailors gathered by the club for the briefing for this, the most gruelling off-shore races, where it was explained to them that the Fastnet Rock in this case was mark 3, Land’s End mark 9 and the Isles of Scilly mark 1 (it just takes a little imagination !).  The handicap and topper class were to do the full course, while for the oppies it was deemed cruel to send them all the way to Ireland, so it was just a leg to Land’s End !
16 boats mustered at the start, and in keeping with the theme the weather was a blustery force 3 to 4.  Tracy in her Comet was the first boat to go  around the rock (the OOD has got remarkably good eyesight). Monica rounded second in her Europe, but not before having some problems remembering whether to pass Land’s End to port or starboard – port is a bit bumpy ! William was the first Topper to reach the Rock before making off towards the Isles of Scilly.  Meanwhile, the two oppies, Jemima and Bea were battling their way down the channel to Land’s End.  Bea had a little help in terms of rather a sizeable tow by the rescue boat (helmed by Jemima’s Dad !), while the OOD pretended not to see.   Tracy and Amy were the first of the handicap fleet back to Cowes, but decided to give the second lap a miss and go off for a play.  The Topper fleet were more resilient with all the boats setting off for a second lap.
In the true nature of the Fastnet there were a number of mishaps, gear failures etc.  Rhys for example lost his mainsheet and needed to be towed in. Others capsized and decided enough was enough.  Anyway ignoring the Handicap fleet for a minute,  William was the first Topper home, Ben second and Joe third. In the oppie battle, Bea pipped Jemima in the downwind run home.  Full results below.  In terms of the full series Joe leads the Topper fleet, with William 2nd,  Edward 3rd, Sam 4th.  In the Oppie class Jemima leads. Don’t worry if you have missed a race, after the 3rd race I will be applying discards so there is still all to play for.
Thanks to Steve, Ann and Phil for providing the rescue boat cover.
Next BBQ Series is this coming Sunday 28th June start at 14:30-ish.  Monica will be running this as I will be climbing Snowdon !   The race theme ?  The Volvo Around the World Ocean Race – best take sandwiches !
James Primrose