January 26, 2015 jollysailor
With an 8 mph South West wind, Phil M surprisingly used a Tektona start with a short one tack beat to 2, up to 4 then a run down to 8, across to 6 and back up the lake to 5 then down to 9 and back through the start.
There were 20 starters of which 12 were Lasers, but the first boat back through the start line was Steve P in his 505 followed by Ian C in the Supernova, then the first Laser was Steve S but he was followed by Newton & Ellen in their Laser 2000. The next seven boats were Lasers then came the Leaders of Neville in 12th and Hugh 14th sandwiching Sylvia in her Laser. Mike C (Solo) and Peter S (Byte) were having a close battle just ahead of Hadey in her 4.7 and bringing up the rear were Alistair S (Laser) and William in his Topper.
At the end of the 2nd lap the leaders were still the same, but Steve P did not come back through the start line and was disqualified (not that he knew this until the end of the race !).
David and Jon C had managed to slip past Mark B to take 4th and 5th spots respectively and Curtis and Adrian had moved past Mike A to 7th and 8th. Peter S and Mike C continued their battle with Peter crossing the line just ahead of Mike C.
Ian C was still leading at the end of the third lap in company with the disqualified 505 with Steve S 2nd and Jon C up to 3rd. Curtis and Adrian were still very close together in 7th and 8th places. Rod B had gained a place moving up to 9th and Sylvia had escaped the clutches of the Leaders moving up two places to 10th. James P had also passed the Leaders and gained two places to 12th. This time round Mike C was just in front of Peter S. At the end of this lap young William received the gun.
At the finish the first two had held their positions, but David C managed to pip Jon to take 3rd, but Newton & Ellen were ominously close in 5th place with Mark B 6th. Adrian managed to nip past Curtis to take 7th.  Further back James P had gained one more place and Peter S had retaken Mike C.
The final positions on the water were 1st Ian C, 2nd Steve S, 3rd David C, but on handicap it is likely that Newton & Ellen will take the second spot from Steve S. Neville, Hugh, Mike C and particularly Hadey should move up quite a few places as they were not far from the back of the Laser pack.
Bad luck for Steve P who sailed the whole of the race, only to find that he was disqualified, but well done to Hugh sailing the Leader single handed and to William who got another finish under his belt in the Topper.

January 18, 2015 jollysailor
With a North wind about 8 mph, Peter R and team set a first beat up to 6, then down to 2, up to 4 then 5 down to 9 and back through the start. It was a tricky choice which end of the line to choose, the far pin had more wind, but the bank end was probably nearer to 6 in a straight line.
19 boats started and it looked like the far pin was the better choice, although Newton & Ellen (Laser 2000) did well starting from the middle of the line.
There was a certain amount of turmoil as a large number of boats attempted to round 2 at the same time but they seemed to sort themselves out on the way up to 4 !
First back through the line were David C then Mark B in Lasers. It was good to see Mark back on the water after a little break. Newton& Ellen came through in 3rd, very closely followed by the Lasers of Adrian and Jon then Ian C (Supernova).  Sylvia (Laser) was next, going well just in front of Steve S (Laser) and Steve P (505). Rod B (Laser) and Neville (Leader) came through together in 10th and 11th with Curtis (Laser) in close attendance in 12th place. There was then a slight gap to James P (Laser), Mike C (Solo) and Andy B (Laser) followed by Mike A (Laser) who had suffered a slight problem rounding 9 when he discovered his tiller was no longer attached to his rudder!   Not far behind Mike were Hadey (4.7), Alistair (Laser) and William in his Topper.
At the end of the second lap the two leaders were the same but Ian had moved up to 3rd. Steve P had moved up from 9th to 6th, Curtis had got past Neville, Andy B had got past Mike C, Mike A had moved up from 16th to 13th and Alistair had passed Hadey. All the other boats maintained station.
The end of the third and last lap saw David cross the line in 1st place; Ian was now 2nd and Steve P 3rd. Others gaining places on this last lap were Jon C moving up from 7th to 5th, Neville who had repassed Curtis and James who had repassed Mike A on the run down to 9.
The final positions on the water were 1st David C, 2nd Ian C and 3rd Steve P; on handicap the first two are safe but Steve P will lose his 3rd place to Mark B.
The other movers on handicap will be Newton & Ellen who should take 4th, Neville who should get 7th, Hadey 8th and Mike C 9th.

The river Thames just beyond the club now has a flood alert warning, with the forecast for more rain over the next few days levels will continue to rise. Please visit the club this weekend and ensure your boat is secure and tethered so it doesn't take a trip down stream.

January 15, 2015 jollysailor
Ellen has edited footage from last Sundays race, if you want to see it follow the link below. We got a bit spread out so but most boats come into view at some point. The camera was on the end of the boom and there is a nice under water shot when the end of the boom went into the water. It all looks a bit more under controlled than I remember, I am sure there was more wind on the day.
Newton
www.youtube.com/watch?v=ObY1IhBUJ2A

January 11, 2015 jollysailor
Bright and cold with a 16 mph SW wind and quite gusty made a change from last week.
All the Laser sailors decided to go for Radials apart from Adrian who came down to a full sail from his Rooster booster! Steve P abandoned his 505 and joined the Laser Radials and Hugh and Sally got together in Hugh’s new Leader, as Hadey had gone for her 4.7. The only other boat out was young William who bravely ventured forth in his Topper.
Roland S set a beat down to 4 then 3, back to 2 and across to 5 with a run down to 6 and back through the start. In the gusty conditions 3, 2 and 6 were interesting gybe marks!
14 Boats started and the leaders away from the line were David and Jon C and Steve S, all in Lasers, closely followed by Ian C (Supernova) and Newton & Ellen (Laser 2000). Slightly further back came Hugh & Sally (Leader) then James P, Adrian and Mike A (Lasers) with Curtis in another Laser still further back followed by Steve P and Dave L (Lasers) then Hadey 4.7 and William in his Topper.
On the first lap Ian came to grief and got his mast stuck in the mud and was passed by most of the fleet as he tried to free himself. At the front of the fleet the first four boats were having terrific battle with David C leading the way. James P dry capsized, which allowed Adrian and Mike to slip past him.
On the second lap Dave L suffered a double capsize and disappeared from view eventually retiring on the third lap. Steve P had a few capsizes but kept plugging on.
By the third lap Adrian had pulled away from Mike who was being caught by James, but these Lasers had managed to get past Hugh & Sally. The four leaders were still locked together at the front of the fleet. Hadey had suffered a number of capsizes and managed to dredge a considerable amount of mud from the bottom of the lake! William was given the gun at the end of his third lap.
There was little change in position on the fourth and fifth laps, but the racing was still tight. The leg from 2 to 5 was a really exciting high speed plane. Hadey was given the gun at the end of her fourth lap and Hugh & Sally and Steve P were finished at the end of their fifth lap.
Hugh & Sally had survived a near capsize and managed to fill the Leader with water up to the gunwales.
At the end of the sixth and final lap Steve S won the battle of the leaders crossing the line in first place with Jon 2nd, David 3rd and Newton & Ellen 4th. Adrian finished slightly behind this group in 5th and James who has passed Mike the previous lap just managed to hold him off on the last run to take 6th.
The final positions on the water were 1st Steve S, 2nd Jon C, 3rd David C, but on handicap it looks like Newton & Ellen will take all three Lasers for the eventual honours.
The Capsize League was in operation for this race and Steve P was the clear winner with five, followed by Hadey with three and a double, Ian C claimed three, Dave L had at least one double and James had one dry capsize. Hugh & Sally and probably others had near capsizes and there were numerous instances of trailing booms
An invigorating Sunday morning !

January 6, 2015 jollysailor
A frosty dull morning with light SE wind reduced the starters to only 7 boats, but did see the first outing for Hugh and Hadey in their new Leader.
Richard S took the wise precaution of setting a short course, in case the wind disappeared completely, with a first beat to 5 then down to X (just North of Tektona), back to 9 and across to 6 and back through the start line.
Steve S (Solo) led at the first mark with Mike A (Laser) next followed by Steve P in the 505 and this was the order at the end of the first lap. Newton & Roz (Laser 2000) were 4th, Curtis (Laser) 5th, Hugh & Hadey (Leader) 6th and Alistair S (Laser) 7th.
On the second lap Steve P passed Mike, who in turn had passed Steve S, to come through the line in the lead. The positions behind these three remained unchanged.
At the end of the third and final lap Mike A crossed the line in 1st place with Steve P in 2nd and Steve S in 3rd, however on handicap Steve S will take the honours with Newton & Roz 2nd and Mike 3rd with Hugh & Hadey pipping Curtis for 4th.

The Jolly Sailor has learnt that following the lead of the Leaders (Mike, Sally, Nev & Hugh) back in September in trying to improve performance by attending open meetings, an anonymous tip-off said David and Paul will be racing in a fleet of 150 on Saturday.  The Jolly sailor has hidden GPS trackers on their boats an you will be able to watch them compete live from the comfort of your armchair at http://events.sailracer.org/eventsites/sailracer.html?196297 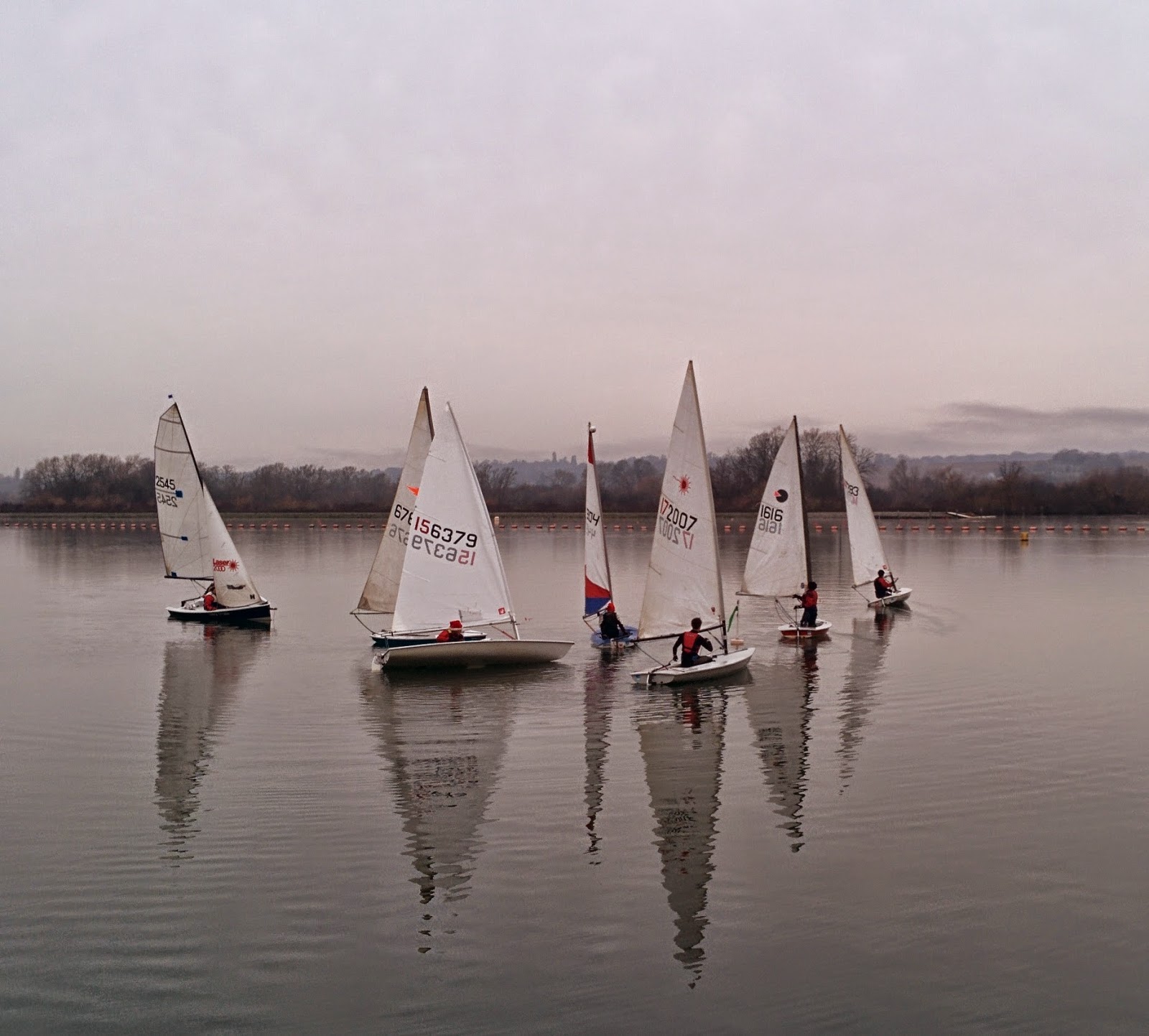