June 16, 2013 jollysailor
RYA Training Course 15th June, Stage 1 and Level 1.
What a daunting prospect for the trainers and trainees alike – 15mph winds with gusts of 29!!!
After the initial briefings from Steve and Dave, our intrepid trainees were introduced to Picos, Toppers and Dave’s ever faithful Wayfarer. The youngsters took to the water in Picos with Alice and Sylvia helming and went for an exhilarating thrash back and forth, watched over closely by Brian and Richard in the safety boats. Everyone came in soaked, even those who had not capsized, but thrilled with the experience. After the lunch break and watching the video, it was the turn of the trainees to take the helm, with Alice, Sylvia and Grace taking the youngsters out and then letting them have a go at helming – inevitably there were some capsizes, but no tears!!
After another spell of rain and strong winds, the sun came out and everyone had a go at sailing, mostly in the reefed Picos. The adults doing really well and surprising themselves!!
A good, if exhausting, day was had by all and everyone left, happy to be returning for day 2 next Sat, clutching their Start Sailing books – compulsory bedtime reading for the next week.
Many thanks to all the instructors, especially Steve who sailed close to the shore, illustrating how to tack, how to come ashore and how NOT to come ashore…very helpful.
Also thanks to our ‘gophers’ who arrived and left at intervals through out the day, helping in the galley and on the shore.
June 14, 2013 jollysailor

Bob and his team set off for Tektona to set an interesting course, Xs,9s,5p,3s,4s, S, while 21 sailors were busy rigging their boats, under overcast Sky and gusty winds.

It was great to see Young Ryan rigging his Topper and Alice again taking to the water. Unfortunately Ryan, after 3 dry capsizes before the start, decided enough was enough and came in not even starting the race – also Hugh was on shore having found the wind too strong for him as well

But not Alice – she was observed with a wicked smile on her face as she pulled clear of Jon in his solo and a capsized Laser at buoy 9 – good for you Alice – you show the boys!! All’s fair in love, war and sailing. Though Jon was seen sulking in the dinghy park later on, muttering…where did respect for your elders go…..!!!

Dave I also found the slammy fickle gusts too much for him as well.

Those that stayed out enjoyed a good sail with Roland finishing 1st,Chris, 2nd and Jon 3rd, 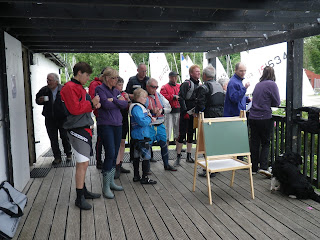 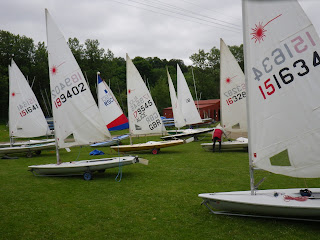 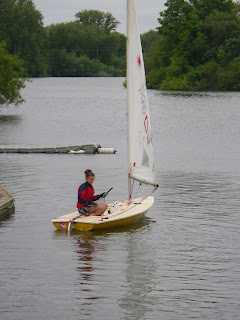 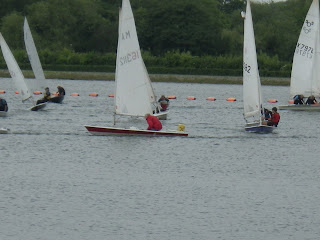 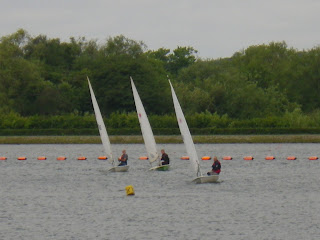 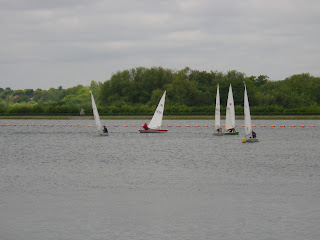 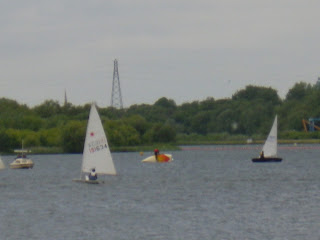 What a wonderful day – sun, gusty winds and lots of Pinkies raring to go! !4 boats with 30+ youngsters and oldies all taking to the water after the usual pink fleet breakfast, thanks to Paul and Barbara. Ken briefed us in the club house showing us the flags and explaining the course, while Barbara M and Barbara S cleared up the breakfast remains.

It was great seeing Richard forsaking a safety boat for his Comet, even if he did have a capsize or 2! There were the brave youngsters in the Oppie, Rhys and Teddy, with their younger sisters out with Dad, James in the Mirror, Gary in his new boat, Dave and Sandra in their Wayfarer, Robert in the Comet, Grace in her Topper and lots more other boats……

Paul and Jan teamed up in one of the safety boat while Ken and Dene were in the other. Their help was much appreciated as in the gusty winds there were plenty of capsizes – Grace went in twice, Monica got well and truly stuck in the mud and had to me rescued, but Alice and Wendy stayed upright in a Laser and full rig Pico, well done girls.!

Everyone came in wet and exhausted after the hour long race and of course the usual disqualifications……Dave for having a compass on board, Sandra for wearing the wrong pink, Alice for going too fast and Monica for littering the lake – she lost her sponge on her 2nd capsize!

But the undoubted winners were Rhys and Teddy in the Oppie – well done boys, fantastic sailing!

Pirates in the afternoon.

Gary held his usual briefing promptly at 1400 by the log – it was great to see so many eager youngsters. Brian and Anne went in 1 safety boat, Carole and Gary in the rubber duck, Tracey in the 3rd boat. They had a short race out in the middle of the lake, with lots of capsizing in the fickle winds – a relay race to the beach and back and another short sail before the exhausted, wet happy band came in for their hot chocolate.

Kate took Affi out in a kayak, while Tane tried out his new Oppie – Craig and Robert on a surf board, retrieving boats floating away from the pontoon – some of us need to do a knot course!!!

The rest of the afternoon saw the BBQ put to good use and lots of youngsters having fun.

Yet another great day at RSC!! 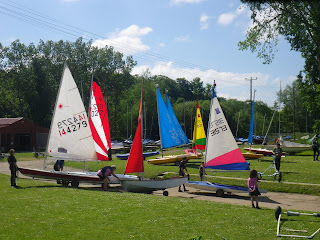 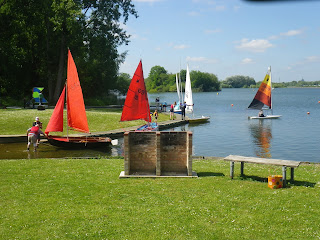 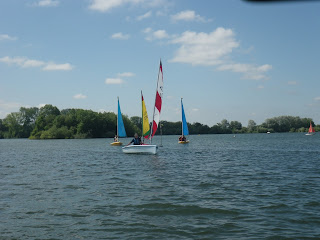 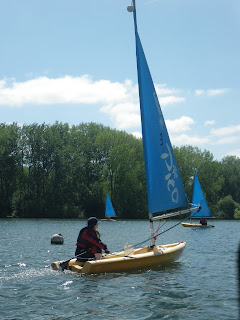 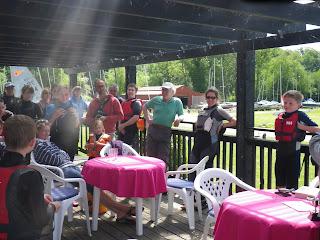 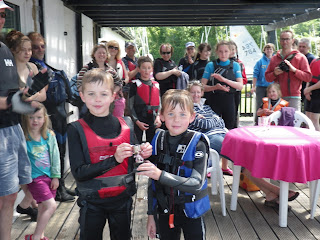 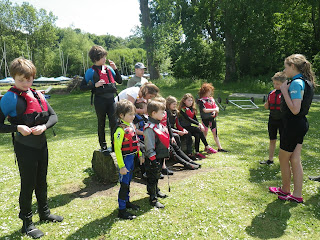 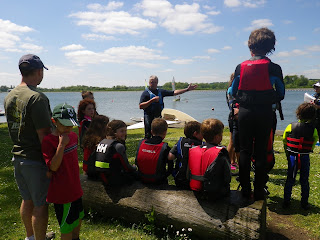 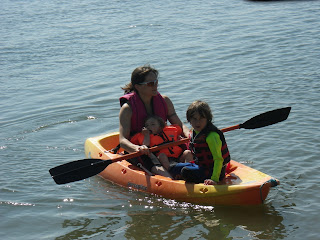 June 6, 2013 jollysailor
Another great turn out with 22 boats on the water in the glorious sun and good breeze. Ken found himself with a reduced OOD Team, but fortunately Tony and Iain , fresh back from Llandudno – no not Wales, Cape Town! – stepped into the breach and the race was able to be run.
It was a good course from Tektona, 6s, 8s,5p,9s,4p,2p,1p,S.
Poor Peter capsized before the start in a freak gust and got his mast stuck in the mud, then had to retire with a broken tiller – bad luck Peter.
The 2 Otters went off first, Mick minus Bobby, a bit windy for him and Curits – he had discovered his Otter during the big clear up the previous day and wondered whether it was still sailable….next came Bob and Jon in their Solos, though Monica starting a minute behind them, wondered where they had gone as she got to the first Mark before them…..Jon got becalmed way behind the port bias start line and poor Bob got a bang on the head from his boom and was seeing stars….not the 1st mark…..!!! Then all the Lasers, Adrian in his Viago and last off the 505.
It was a shifty wind with some fetches instead of beats and some great reaches.
Monica held off Dave briefly, Chris took a little longer to get through her but Nick overtook the Europe in the last few seconds of the race!!!
Finishing places 1st Dave, 2nd Chris, 3rd Nick.
The afternoon saw Mike and Sally manning the safety boat, with lots of people coming down for a BBQ, and afternoon sail in perfect conditions, wind and sun. 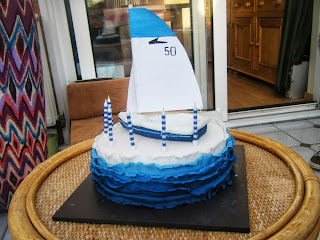 Well out came the sun and with it some 35 people ‘rocked up’ to the club to help with the monthly list of jobs:- strimming, pot hole filling – thanks for the scalpings Curtis – boat park tidying, boat park spaces sorted – Mark with pc in hand and Catherine in tow. Good job guys.
Meanwhile the Moore clan towed Tektona to the jetty for her annual scrub up and pump out – Louise and Alice certainly enjoyed ‘playing’ with the power hose! Club boats were moved, membrane put down, weeds sprayed etc, etc.
Inside, windows were cleaned, the loft and stairs hoovered, lost property removed to go to the nearest charity shop, the lock on the disabled loo fixed, thank you Auntie Pat and Alex and even the cutlery drawers were sorted – thank you Barbara.
There was a general party atmosphere, with lots achieved with fun and laughter and endless cups of ‘real’ coffee to fortify us – well done everyone.
For those of us who haven’t ‘partaken’ of a work party yet – please be mindful that we are all required to attend some work parties in order to renew our membership next year…….
Later that day, the commodore and his good lady wife, together with the commodore of vice were seen playing rounders in Woodley.  But not to worry that they will be forsaking the club, there was a homemade cake to remind them of the only real sport around. Nice one Amy…