May 26, 2013 jollysailor
Almost perfect racing conditions – sun and wind, a shame it was shifty. Karen as SOOD thought she had the perfect start line and course until the wind changed 5 minutes before the start!
Pat got off to a flying start in her Mirror and managed the first lap and a half before anyone caught up. She then got intimidated by the laser hordes and decided enough was enough, retiring gracefully. Steve in the 505 was almost lapped before he started – Steve you really should get a slower boat then you could race with the rest of the fleet.
Monica in the Europe, Bob  and Jon Mc in their Solos and Chris in the Firefly were keeping ahead of the all the Lasers except David and Chris who struggled to catch Peter in the Enterprise.
Oh Monica, whatever did you do – 5th place….then you capsized and lost 5 places and all in the last 5 mins of the race!
David and Chris had a last tacking duel in the final two minutes with David the final victor but so intent were they on each other they forgot about Peter who nearly overtook them again!!
Final positions David 1st, Chris 2nd, Peter 3rd.

May 23, 2013 jollysailor
There was an amazing turn out of 32 boats in the lovely sunshine!! Paul and his team set a long course, with boats crossing each other in the middle of the lake – one sailor was heard to say “…it was the worse course he had ever sailed, trying to remember where you were going…”
Despite that, we saw Hugh back in his Byte; Pat and Gordon in their Mirrors; Newton, Steve and Adrian all flying their colourful spinnakers; Sylvia sailing again for the first time since her injury last August; and even Alice taking part in her first Sunday race, coming all the way from Lewisham  to take part, and she wasn’t last in the Laser fleet – well done Alice. It was a first for Ryan too, a pursuit race in his New Topper, well done Ryan.
Paul sensibly dragged buoy 6  out into the wind, which came and went through out the race.
The sunshine saw Bill D, Colin and Bill C, helping with the launching of boats – the slipway was very busy….
There was some interesting racing with Roland and Chris getting becalmed briefly, while a gaggle of Lasers, Peter in his Enterprise and Newton in his Laser 2000 caught them up, very frustrating!
With the shifting winds the fleet stayed together in little clusters – Dave had an interesting experience at buoy 6, hitting it, another boat and capsizing and then having to do umpteen turns……nice one Dave!! But it was not long before he had caught up again.
As the 90 min hooter sounded it was difficult to keep track of the finishing places – Paul was seen dashing into the clubhouse clutching the race sheet to work out the placings to everyone’s satisfaction.
For final results see the results page on the web site….the Jolly Sailor ‘lost the plot’ as well!!
The afternoon saw plenty with some 15 boats, cruising, practicing for their next training, overseen by Sylvia in the safety boat, trying out her new skills from her previous day’s training in how to rescue  capsized boats with Richard and Brian, While over on the ‘beach’ the Brooks family and friends, were celebrating Gary’s birthday….though he assured us it was not a ‘big birthday’ he had bought himself a new boat, which was launched with ceremony and pink bubbly!!
A very pleasant Sunday afternoon was had by all – not sure about Brian’s chemistry lesson going on in the clubhouse…..a complete foreign language for most of us!!
Don’t forget to send photos and news to the Jolly Sailor – email address on the back of your yearbook.

May 16, 2013 jollysailor
Yet another windy day, but Adrian and his team set a good course for the 14 starters, 5p,2s,4s,6s,9p,7s. There was some ‘umming and aaring’ in the dinghy park as to what sails to use, most of the Lasers chose radial sails, whether to reef etc. Monica teamed up with Dave P in his reefed Wayfarer and had a great sail, while Hugh forsook his Byte  to crew Newton in his big boat with some great spinnaker work. Lynne and Steve were just content to stay upright – no spinnaker for them!!
Poor Mike in his Solo didn’t even make the start and retired after a nasty capsize, while Dave L had to be pulled out of the trees with his upturned Laser.
Paul and Nev broke their main halliard 2 minutes before the end of the race, trying to put on more kicker, but survived and didn’t lose a place.
There were murmurings in the dinghy park, after the race, that more reaches would have been better, but the wind was very shifty as well as strong
Dave got through Chris to finish 1st,  Chris 2nd and Ian 3rd.
The afternoon saw 3 novice sailors out in Picos, being assisted by Steve in another Pico and Phil in the safety boat – excellent progress was made with no capsizes – well done guys!!

May Pink, May Pirates and Open Day

Sunday and May bank holiday 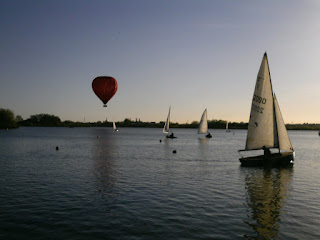 Was this someone with an over-inflated spinnaker lining up for the start of the Gillette last Wednesday?

Or perhaps someone trying to get an early viewing of the club before Saturday’s Open Day?

Nonetheless, it didn’t deter the 20 or so boats that set out for the Wednesday evening race, including some new faces.  Mark set an interesting start, which was difficult to judge from both land and water, but no hooters sounded.  The breeze was so light that the leader stole the wind from those behind and got such a head start that no one could get close.  No, Sally, that wasn’t the Leader I meant – not such a good start this week, but you still managed to “beat Dean on the water”.

The wind got lighter and lighter the longer the race lasted, and when the last sailor was making his weary way into shore, others were already showered and tucking into a delicious dinner.