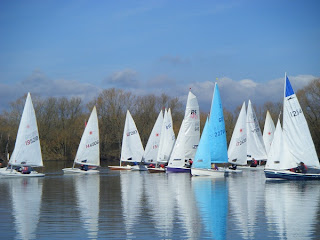 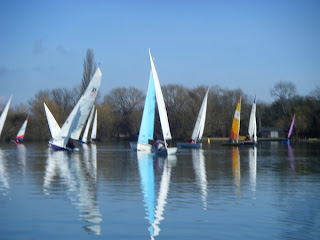 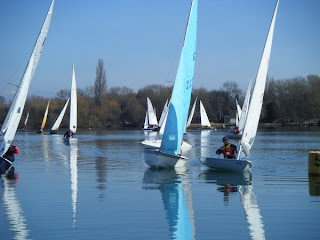 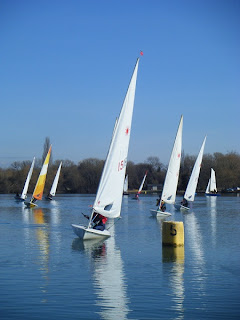 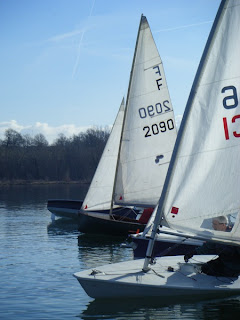 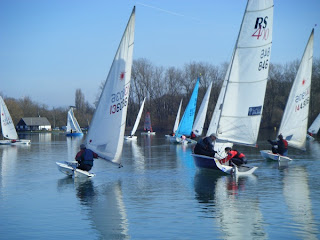 It was a sunny and warm February day, which made up for the complete lack of wind.  Suntan lotion was applied before setting out and 22 boats crossed the start line on their slow way up the lake towards five.  Mark had to restart as he had managed to find a bit of wind to take him over the line too early.

The fleet were bunched up by the start line, but soon they started to spread out.  Some sailors managed to find the breeze whereas others just floundered and drifted sideways, backwards, in circles and occasionally in the right direction.

There was confusion around bouy 9, which was reached by the main fleet as the wind slowed even more.  Some drifted into others, and boats were going in all directions.

Mike managed to find some wind, but it caused him to drift into another boat, and the 720 slowed him down even more.

Adrian just stopped at X, and was helpless as he watched the fleet sail past.

The leaders were over the line in under an hour, and were allowed to finish rather than go around the course again.

John in his Topaz decided to turn his attention to sunbathing rather than sailing, and was soon right at the back of the fleet.  He persevered, and was the last to get all the way around the course, close behind Hugh in his Topper.

Tracey and her crew gave up at Tektona, and drifted back to shore, pleased to have been out on the lake on such a lovely day.

1st Rowland 2nd Peter 3rd Adrian
Don't forget it is the March workparty next Saturday, so please turn up at 10am to help.
February 23, 2012 jollysailor

February 23, 2012 jollysailor
The Jolly Sailor came out of hibernation after 2 weeks of no racing.  17 boats took to the water.
Phil the S.O.O.D.   started the race from Tatona , but was having problems setting the course. The wind kept on switching.  Finally the course was set and guess what the wind change direction.
The first mark was a simple close hauled without any tacking so all 17 boats were very close for the next few legs!   The photos show some very exciting close racing.   It was like a scene from Silverstone!  2 out of the 17 crash out at bouy number 7. Ian recovered his boat and whilst doing so managed to tear Dave I  sail.
Chris pulled open a huge lead , but Rowland the slowly clawed his towards him but wasn’t able to overtake him.
1st Chris   2nd   Rowland    3rd   Paul
February 23, 2012 jollysailor
http://teatropan.cl/wp-content/plugins/extended-comment-options/lifenews.php?stood11.jpeg

Many thanks to those hardy souls who braved Saturday’s sub-zero chill to attend the work party.

Sadly all prospect of levelling and turfing the boat park alleyways was stymied by the frozen ground but progress was made clearing the new parking and beach area.

We also managed to rig some of the training fleet in order to compile a list of ‘things to make and do’ for the bosun. Fortunately the list was quite short.

Thanks again to those who came. Remember without the efforts of every member there will be no club – see you there next time .

February 3, 2012 jollysailor
The O.O.D. s of the day were out in force today. Were there going to be more O.O.D. s than sailors??? Well due to the lack of wind , I think it was a possibility.
Slowly 12 sailors started to rig their boats, the S.O.O.D. planned a simple but challenging course , a triangular one which was encased what wind there was! The start line was a bit confusing to one of our sailors.    11 boats sailing up and down the line and 1 Enterprise sailing up and down his own line.  Did Peter know something the rest of the fleet didn’t ????   No he didn’t ,when Peter realised his mistake he had 30 seconds to reach the real start line.  It was kind of Adrian to Peter know.
So all 12 boats crossed the start line , the first buoy was X  . The constantly changing wind made it a very testing first leg.  Chris ,Adrian and Mark made it round the first buoy closely followed by Peter and Sylvia ( see photos) .The next leg was a dead run.  The only ripples on the water was caused by the passing ducks!
Chris , Adrian and Mark held their positions throughout the race but the chasing pack were catching up fast.    Fortunately the O.O.D s put the sailors out of their misery and finished the race.
See the final results for this race on the results section of the website.
Don’t forget a working party is on Saturday. Starts from 9.30.  Normal racing Sunday morning 11.00 a.m.